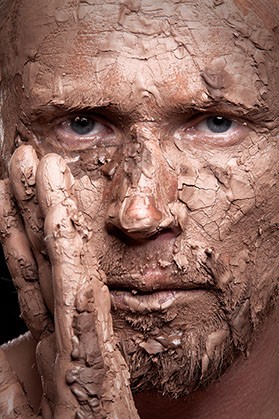 My name is Tomek Radziewicz. I created this site to share my passion with you. I hope you can relate to this passion no matter where and who you are. I don't think you and I are fundamentally different. The only difference that separates us is my experience and a path I went through before becoming a sculptor and a character designer for the games and film industry.

My life story is complicated, and parts of it resemble a horror move, a thriller or a science fiction novel.

I live in the heart of Europe, in Gdańsk (Poland). In a reality where the wider world, free media, global cinema, pop culture and all the frills of Western life had seemed to be merely figments of the imagination in the 80s. Everything was black and white at the time. People were either good or bad, they were TYRANTS or HEROES. The era I grew up in was a nightmare for many people, but as a teenager I wasn’t aware of that. I had my own nightmares to deal with, and I had my own monsters and heroes who were as real as you and I.

So... when I sculpted for the first time? Good question - since I remember I always had a pencil and some modeling clay in my hands. This has not changed. I am a professional artist today, but I have very fond memories of my youth. My desire to create was fueled by a mix of pure passion and fun.

My first clay figures were heroes from the 80s blockbuster films such as Never Ending Story, Super Man, Terminator, Robocop, Alien and ET, as well as monsters – Godzilla, King Kong and Gamera. I vividly remember my first encounter with cinematic superheroes when I was 10 years old. I was fascinated and petrified ad I would like to visit the cinema as often as possible. I watched the same movies over and over again. I wanted to be a part of the superhero universe and I wanted to have every monster exclusively for myself. So I made them... I gradually filled my room with monsters in different shapes and forms. I burned them, I drowned them, I froze them, I died with them and I was reborn with them. Each night, my clay Terminator would go up in flames in the stove to reveal his wire and tinfoil interior, only to be remade the following day.

My childhoo's passion prompted me to study art in Gdańsk, Poland and pursue a degree in sculpture in the Academy of Fine Arts in Karlsruhe, Germany. I graduated in 2002 and have been a freelance artist ever since. I try to make the most of my classical training to create a unique world of small and large sculptures.

Art is my passion. In my daily work, I create large stone and bronze sculptures and participate in sculpting exhibitions and plein-air workshops. I undertake sculpting commissions for private clients, institutions, organizations and urban projects. However, my childhood passion had never left me. Inspired by my memories, in 2014, I created a sculpture for The Witcher 3: Wild Hunt Collector’s Edition, and a large sculpture of the Witcher fighting the Noonwraith for CD Projekt Red. My sculptures have been seen by many fantasy fans around the world, and I realized that I had to return to my childhood heroes. Since then, I have created numerous sculptures, some of which were based on my original designs. I also started working for gaming and film companies. In 2017, I created a sculpture for Fatima, an animated feature film produced by Platige Image, and a year later, I designed monsters for Deep Blue Production. In 2019, I designed a character for Cyberpunk 2077, the latest production from CD Projekt Red, which will be featured in the collector’s edition of the game in 2020. Acting on the promise made by my childhood hero, I decided that “I will be back”. And so I indulged my childhood passion.

I believe that I'm going on a wonderful sculpting adventure. I never know what will be created the next day, and this is what I like the most in my work. I have many ideas to share with you. My hands are literally shaking in anticipation of my future works...

Welcome to my world and feel free to monitor my progress and personal development. I hope that I will never stop discovering new things and that I can find inspiration in my work, just as others inspire me.