A collectible figure for the Collector's Edition of CYBERPUNK 2077. Concept sketch made of NSP medium. 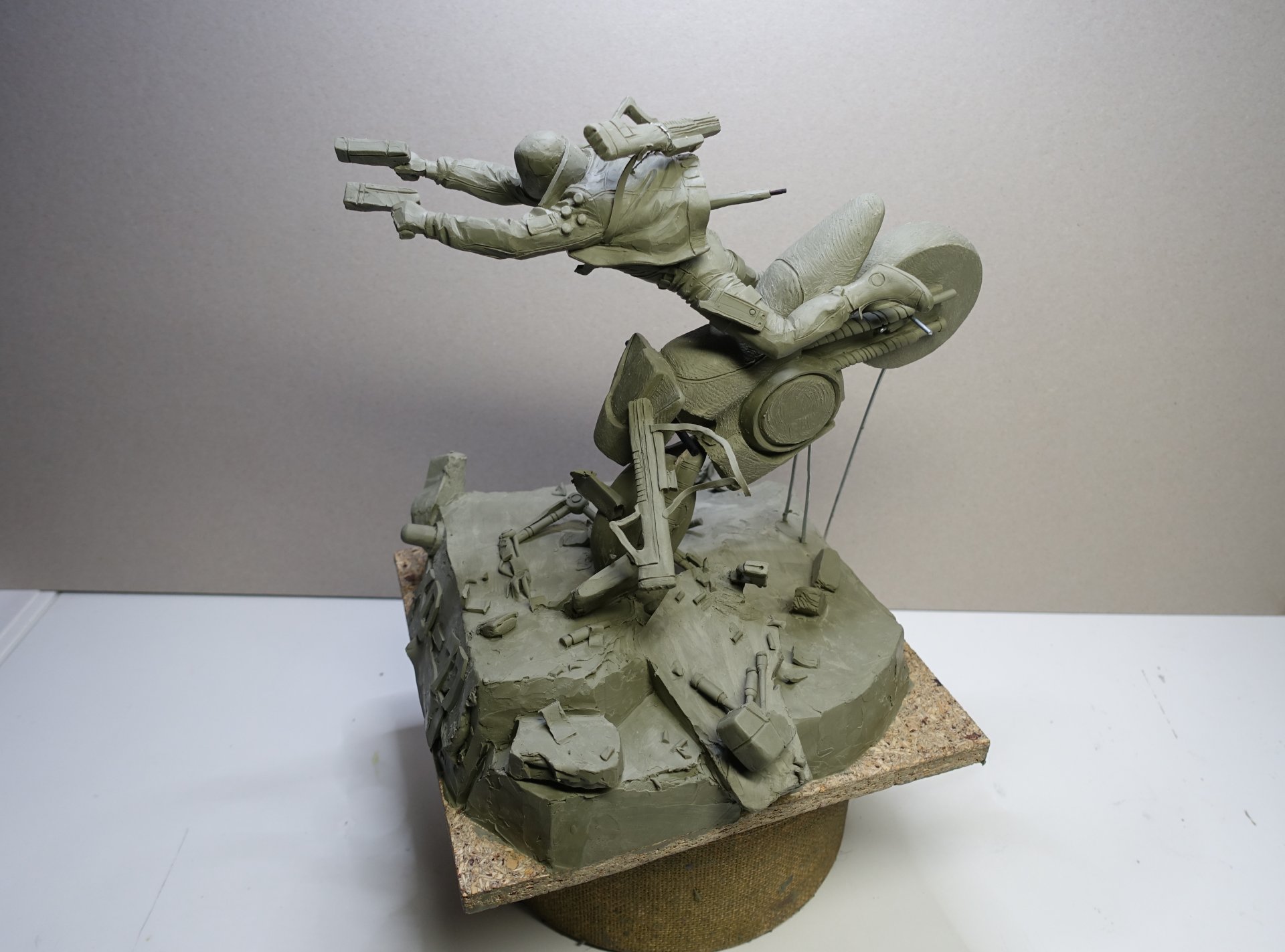 A collectible figure for the Collector's Edition of CYBERPUNK 2077
Are you lucky and own the Collector's Edition of a game full of surprises? Do you already have a unique collector's sculpture on your shelf? I am convinced that many know Cyberpunk 2077, got into their avatar and to know the game from the inside. And do you know the history of the collector's figure for this game and do you know what its beginnings were?
If you want to find out about my adventure with Cyberpunk 2077, I encourage you to read this post.

I think I can definitely say: I am lucky! I made a conceptual sculpture on the basis of which the figure for the Collector's Edition of Cyberpunk 2077 was created. The origins of this sculpture began quite inconspicuously - not from the cybernetic world, but from working on another project: The Witcher. In 2015, when I was creating a large sculpture of the Witcher fighting with Noonwraith from the third part of the game The Witcher III Wild Hunt (now it is located at the headquarters of the CD Projekt Red studio in Warsaw), a thought of the Cyberpunk 2077 project slowly gave me no peace... By this time all my attention was focused on the mercenary from Rivia, but I was already thinking what would happen if I designed a figure for Cyberpunk. In 2016, CDProjekt RED, in cooperation with EC1 Łódź and the City of Łódź, organized the International Art Festival named Promised Land Art. During this festival, professional graphic artists dealing with video games, films and special effects talked about the backstage of their work, about the world of games and film. This International Festival of Comics and Games was a unique event. I was invited as a speaker and had pleasure of giving lectures and workshops on character design. During this festival topic of Cyberpunk came back to me... However, question about the design of a collector's figure for Cyberpunk was raised by the studio after two years.

I will not hide: I was very happy! From the beginning, I knew it would be a great challenge and responsibility, but also great fun. I knew that the received inquiry about the sculpture was the result of our good cooperation during realization of Geralt's sculpture and trust they placed in me.Adam Badowski's good evaluation of my work and creative cooperation with Paweł Mielniczukwhile working on The Witcher had a significant impact on this decision.

When we created the collectible figure for The Witcher, the entire sculpture was hand from start to finish: from a small conceptual sketch made of plasticine, to the final model for production, based on classic techniques and tools. At each stage of the prototype, I had an influence on what was happening. The process of creating a new Cyberpunk figure emerged differently. Namely, it was the result of a more symbiotic collaboration between classic design approaches and contemporary design techniques. For this figure, based on the references given to me by CD Projekt Red, I created an idea for the scene: composition of a collector's figure. After creating the model using NSP by Chavant, the sculpture was scanned and further refined by a great team of sculptors from the studio. Of course, while working in the virtual model, many different things and changes were made, while the main idea was kept. You will be able to see these changes by comparing sculptures that I will soon present on my website and social media channels.

2017 began for me with the slogan: work on the concept of a Cyberpunk figure.

It was a completely new experience for me! While designing, I was moving in a different world and I knew that this time all forces would be joined and the sculpture would be created with a huge contribution of sculptors from the CD Projekt Red studio. My main task was to focus on the idea for scene, composition, setting the masses, forms, details and narration in sculpture. As in my everyday work I like to change both the scale and the subject, the design of a new figure itself was not a big challenge for me, but working with modelers was definitely a new experience for me.

Before the final version of the Cyberpunk 2077 collector's figure was created, I made some preliminary sketches from plasticine. If I remember correctly, there were six of them. During the design phase, I had a lot of freedom. CD Projekt Red gave me a theme, chance and their confidence to prepare a unique sculpture - this gave me wings. I started my work right away, I created few quick and easy sketches, from which we were to choose the most interesting one for further work. I must admit that at this stage none of the concepts convinced me to the end. So I thought about the diorama of a hero hitting an obstacle with a motorcycle and jumping out of it with force, a pose in which he aims at his opponent with one mechanical hand as wanted to cut off his head, and with the other he aims a pistol at his heart. This composition became the ancestor to the final version of the figure. I was glad to see that others liked this idea as well. It was just a quick sketch to show the direction of my search, and I could see then that it was a good idea. Despite the initial

assumption made by CD Projekt Red, which was a diorama depicting a scene with a car, I managed to convince them to a project in which a Cyberpunk guy should be presented on a fancy motorcycle in dramatic and dynamic pose. Finally, from among several preliminary sketches, we chose two for further work. The first was a hero sitting on a motorcycle and aiming a gun somewhere into the distance - it was a calm, static composition with lots of details. The second version, my favorite, was the hero popping out of a crashed motorcycle, crushing the cyborg with its front wheel while killing another. This version was significantly changed in the later stages and was eventually simplified and reduced to two characters.

The decision was made and I started refining selected hero designs with a motorcycle in two different versions. I started carving with passion, thinking: how to finish the sculptures to get the "wow" effect?

I came back to the studio and craved ... and carved ... looking for the most interesting proposition for a collector's figure. I devoted maximum attention to it. At the same time, I did not focus on great details, but rather on including a certain atmosphere in the concept, so characteristic for designed diorama. Therefore, in the first version, the hero on a motorcycle held the weapon close to his shoulder and aimed at space. The character on the motorcycle was placed on a stand that represents futuristic reality. Destroyed, with elements of an explosion, broken cables, with skeleton of cyborg lying at the foot of a motorcycle, a futuristic weapon. It was a quiet atmospheric diorama. The second version was a completely different story - a dynamic composition, like a frozen film frame, showing a motorcycle hitting a road and a protagonist being thrown out by the momentum, automatically drawing his weapon and aiming at the enemy. Until the end, alert, ready for anything that may happen at any moment. I admit that I really liked this project. I liked its dynamics and narrative. The character literally smashes another cyborg by crushing him with a motorcycle and without thinking for a moment follows the blow, leaving no illusions about who

the main guy is! When I presented the finished sculptures in CD Projekt Red Headquarters, I finally heard the long-awaited "WOW"!

This is the scene that the collector's finaly presents. Below you can see some photos and videos of what the concept design looked like. What you see here is a sculptural concept - it was made with NSP by Chavant and carved by my hands. Soon I will show you more interesting facts from the whole working process such as: the process of creating six different versions of the collector's sculptures, describing what materials they were made of and how they changed, what tools I used and what design challenges I solved to finally get the effect you see.

You are invited today - by me - Tomek Radziewicz - creator of the conceptual Cyberpunk 2077 collectible figure.