Design and sculpture of Dracula by Tomek Radziewicz. Unique portrait of the severed head of a man-monster from under which blood is shed. Inspired by Egyptian mummies, casted in  polyurethane resin, painted by acrylic paint. Limited edition of 200 items. 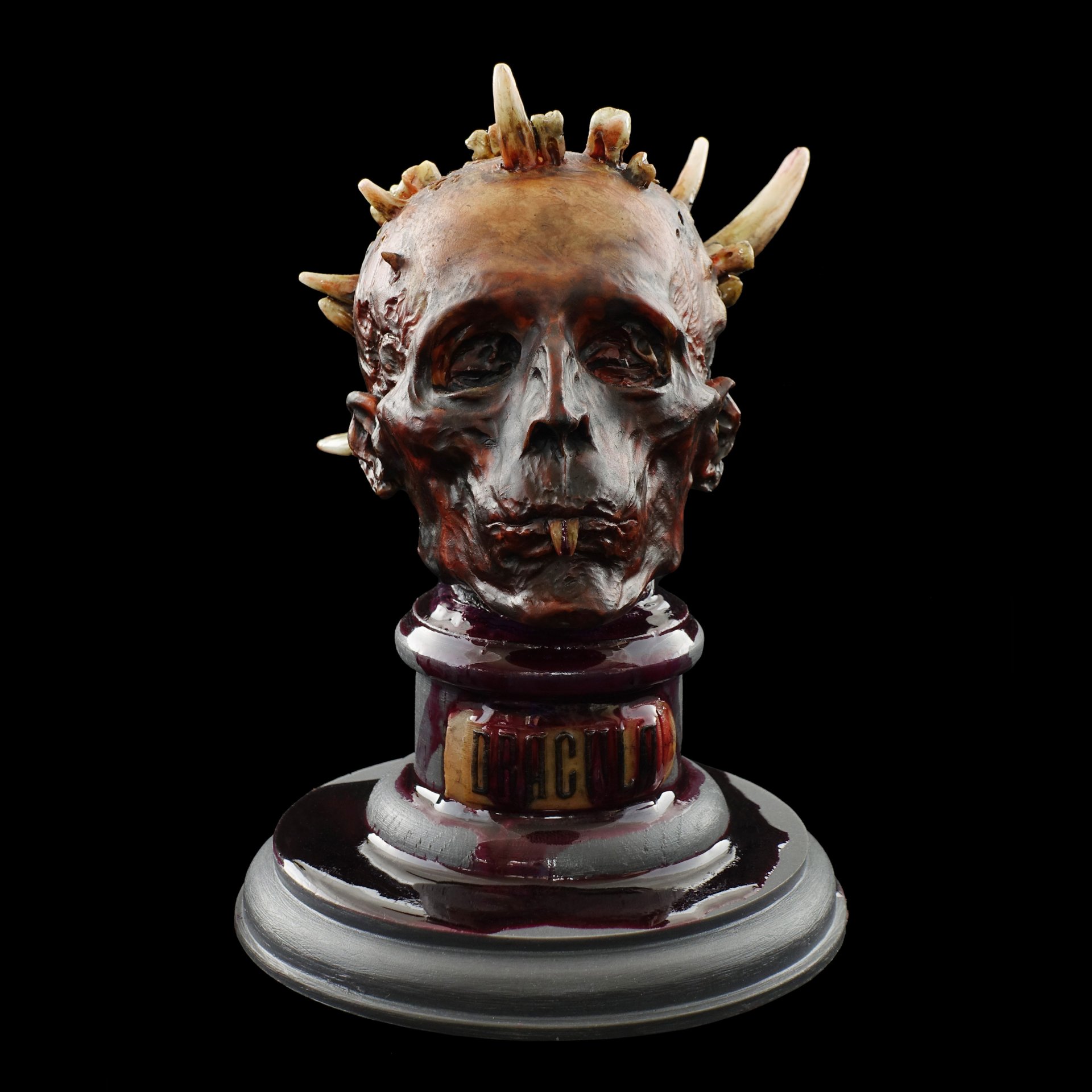 Dracula - has been appearing in our culture for a very long time. The hero of Transylvanian legends was exploited in various ways: in film, theater and novels. He has gained a special place in pop culture, especially in cinema, becoming an inspiration for filmmakers all over the world. Plastic arts such as painting and sculpture also reached for this topic.

In Dracula's project I wanted to make an interesting, unique portrait, the severed head of a man-monster from under which blood is shed. From the very beginning, the collision of the dry and wrinkled head with shimmering fresh blood, was the main and most important assumption for a dark portrait. I wanted him to be interesting and attract attention.

As a creator, I always try to approach each sculpture individually. Avoid clichés, but of coursestick to a certain canon if necessary. However, I always strive for individuality in my works.

The beginning of work on the sculpture I started with browsing websites for inspiration and very quickly found that I would create a Dracula inspired by Egyptian mummies. I looked through many photos, from the mummy of a screaming woman, one of Guanjuato in Mexico, to the mummies of the pharaohs in Meneptah or Ramses II. While looking for inspiration, I couldn't pass by examples such as the fantastically well-preserved man from Tollund or the man from Grauballe.

When designing my Nosferatu, I envisioned a dry, wrinkled face, which on the one hand is calm, but at the same time terrifying in this calm - this is how the severed head decorated with a crown was created. However, it is not a banal crown of gold, but a crown of tusks of various animals, victims of the most dangerous beast on the Earth. And so, the teeth of a human, shark, elephant's blows, others arranged in the shape of an unusual but expressive crown, appeared on the smooth skull. Dracula himself has only slight protrusions. This is a deliberate creation, a kind of formal perversity that is supposed to build the character and terror of the portrayed.

To work on this small portrait, I used polymer clay, a material that I usually use for sculpting on a small scale. Polymer clay is a material that allowed me to make a precise carving, and at the same time with great freedom. Due to the fact that it is very flexible, I easily and quickly modeled the main body of the head in it. It took me more time to develop the detail and then the textures, which required a lot of patience. When model was finished, I finally fired it in an oven at 120 degrees Celsius for about 20-25 minutes. In this way, I got a hardened sculpture that was a ready-made model for my further work.

I made Dracula using just a few small, basic, self-made tools. Some are made of wire, some of guitar strings or a needle. These tools have the best fit for my hand and simply work best for small scale work. I used a little knife to crave main shape of a head, and while working out details, I used small dental tools. The skin texture was made with a free gesture with help of ball tools, and finally the entire sculpture was smoothed with a brush, maintaining its subtlety, which I really cared about.

To fix the sculpture in resin, I first made a silicone mold. I mostly use condensation silicone, which is predictable in its behavior. In the case of Dracula's portrait, the form was shaped like a cube. Before the sculpture was covered with silicone, it was firstly vacuum-vented to avoid the appearance of small bubbles on the mold. I cut the finished form properly in order to remove the original from the inside, and then, after folding and pouring the resin inside, next copies of the sculpture will come out very precisely. I pay special attention to this process, because I want my sculptures to be interesting not only in sculptural terms and conceptual interest, but also very technically well-made.

In my workshop, I mostly use polyurethane, epoxy and polyester resins. Depending on the scale and final effect, I use the appropriate material. The portrait of Dracula was casted in polyurethane resin, which is a perfect choice for portraits of this size. In order for the sculpture to be precise, i.e. without air bubbles, the casting must be properly vented. The process itself is equally important. All my small sculptures are casted in a pressure chamber made by myself - it makes me sure castings are precise. My works are casted in two basic colors: gray and flesh-colored. I use standard pigments to dye the resin, in two color versions, due to the fact that collectors and artists use different painting techniques. The limited edition of Dracula's portrait was cast in resin with a light color, similar to ivory.

The sculpture was glazed in several layers, therefore the light-colored base was perfect for bringing out the depth of the colors. As there are many ways to paint, I decided to paint Dracula in a simple realistic way using basic tools and acrylic paints. From the beginning, I assumed that the edition of skulls and the portrait of Dracula would be painted with acrylics using brushes and moat techniques. The laser technique allowed me to get a depth effect that can't be achieved by a covering painting. This technique consists in applying several layers of paint in such a way that each of them does not completely cover the previously applied one. Thanks to this, you can see the individual layers up close and the colors intertwine in places stronger and sometimes weaker. This interpenetration of well-matched colors was supposed to give the impression of painting depth to the sculpture, and the sculpture itself looks more credible and interesting.

In the portrait of Dracula I wanted to create a horror effect, so I put different layers of color on the bright surface of the head. Inspired by Egyptian mummies, I went for a warm colour range and used suitable paints for this, applying layer by layer. First, I covered the deepest places, around the neck and eye sockets, with a brown and red color, here and there with a bit of a little dirt. Then I covered the entire head with a sepia moat. When the paint was dry, I rubbed head in several places, especially around the canine and tooth crown, to reveal the bright color of the resin and thereby emphasize these elements. Then I covered head with a layer of black moat, rubbing it in certain places and finally with a red layer. Selected places, the ones that were supposed to shine the most, were gently covered with lacquer.

The parallel of a satin head in warm colors with fresh glassy blood on the stand was supposed to give this sculpture a unique character. It took many trials and surprises to get a satisfactory result. I was very keen on getting the feeling of freshly spilled blood, therefore used a transparent polyurethane resin with red and black pigments. This artificial blood made of resin gave the effect of a freshly spilled puddle, which was my main goal to achieve. To liven up the whole composition, I decided to put the word Dracula on it, with dripping blood, thus emphasizing the nature of the horror.

What do you think, have I achieved the effect in your opinion?